The Large Intestine is called the ‘Minister of Transportation’.

It controls the transformation of digestive wastes from liquid to solid state and transports the solids onward and outward for excretion through the rectum.

It plays a major role in the balance and purity of bodily fluids and assists the lungs in controlling the skin’s pores and perspiration.

Coupled with the lungs by Metal energy, the large intestine depends on the lungs for movement via the expansion and contraction of the diaphragm, which works like a pump to give impetus to peristalsis by regulating abdominal pressure.  Thus sluggish bowels may be stimulated and constipation cured by deep breathing and by tonifying lung energy.  Conversely, congested lungs and clogged bronchial passages may be cleared by purging the bowels.

The Large Intestine belongs to the element Metal, whose functions are receiving the pure qi from the heavens and the Colon and eliminating the waste. The Colon removes more than just the waste of the digestive process. It removes the waste of every organ and function, as well as mental and spiritual rubbish. 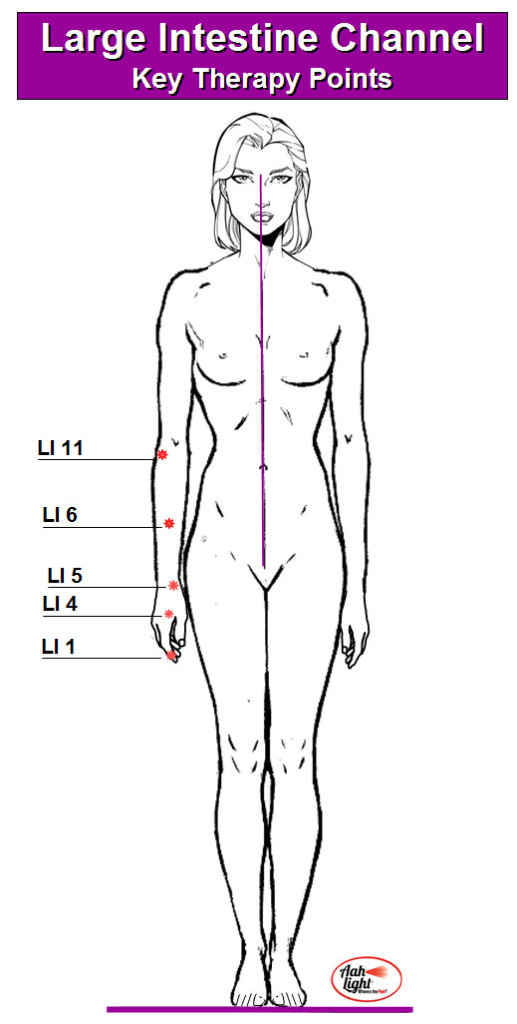 Large Intestine 1 – If this Li channel and specifically this point, is doing its job, rubbish will not collect, stagnate and rot. You will not only have a clean body, but a clear mind – able to let go of old “baggage” of the past and take in new and fresh ideas. You will also will manifest a clean, radiant spirit – able to be inspired, to inspire others and live in fullness of life. Just as metal gives value to the Earth in the form of minerals and trace elements, it gives us our sense of self worth.

Many patients have accumulated so much rubbish – physically, mentally and spiritually – that they have lost touch with how their body is designed to feel. Restoring balance to this channel will result in something like the cleaning of layers of debris from a stone and finding a dazzling emerald beneath!

Large Intestine 4 – Many of us become imbalanced and seem unable to wash away the waste of our own bodies, minds or spirits. As debris collects, we become physically constipated, but also cynical and negative, tending to see the worst in ourselves, others and in life situations. The point is known as “The Great Eliminator” and has the ability to flush out the stale toxins within.

Large Intestine 5 – A stream is water, moving with a current, confined within banks. As such, it has a specific direction and flow. This is the fire point of this meridian channel. Fire controls metal by melting and softening, making it malleable. Like metal that has become cold and inert, many of us are metal-imbalanced and have become hard, immobile, unable to bend, attached to the past, holding on to shame, guilt and unworthiness.

We become unable to let go of that which binds us. This point, used at the right time, encourages release – direct, active and with a good measure of humor, love and compassion – the warmth of fire. It becomes a washing away of that which defiles and compromises our health and emotions.

Large Intestine 6 – This point, the junction (or Luo/Connecting) point of the meridian can be used to prevent backup of waste as it is eliminated. It’s like cleaning out an old closet where, on the way to the trash bins, the garbage is temporarily piled in the nearby hallway. Before long, the hallway becomes so filled with trash that it is jammed tight and nothing can pass through! What is needed is a “side passage,” providing another way out.

It might happen that as we treat the Large Intestine channel that things get stuck. This point can be treated and help unlock the jam, reestablishing the movement and flow of elimination.

Large Intestine 11 – This point, the Earth point of the meridian, brings the qualities of groundedness and stability to the process of elimination. Letting go can be a fearful prospect to a patient who has become identified with attachments of the past, old ways of thought, beliefs, opinions and assumptions.  All of the old waste must be cleansed in order to be free physically, mentally and spiritually.

There is a strong correlation between emotional attachment to past traumatic events and constipation. We cannot be truly free and still hold onto negative things that identify us or cause us to feel entitled. It’s like saying, “I want to get better…but I have a right to be angry!” Of course you do…but in continuing to hold that old resentment, we are in a prison of our own making and freedom is an idea, not a reality.

Treatment of this point can reach those hard-to-get places of our large intestine AND our emotions. It will restore the proper function of this channel, while uncovering the hiding places of rubbish and helping restore happiness and the natural flow of life.

The AAH Light is the most effective method of treating these points. Just 10-20 seconds per point, three times a day, and you’re going to love the result!